The Excerpta Constantiniana and the Byzantine Appropriation of the Past by Andras Nemeth, Alumnus of Medieval Studies 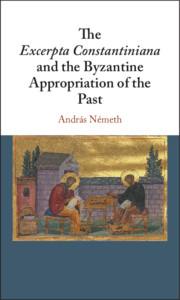 We are proud to announce that our alumnus Andras Nemeth has his new book published at Cambridge University Press. The title of the book is The Excerpta Constantiniana and the Byzantine Appropriation of the Past.

"The Excerpta project instigated by the Byzantine emperor Constantine VII turned the enormously rich experience offered by Greek historiography into a body of excerpts distributed across fifty-three distinct thematic collections. In this, the first sustained analysis, András Németh moves from viewing the Excerpta only as a collection of textual fragments to focusing on its dependence from and impact on the surrounding Byzantine culture in the tenth century. He introduces the concept of appropriation and also uses it to study some other key texts created under the Excerpta's influence (De thematibus, De administrando imperio and De ceremoniis). Unlike world chronicles, the Excerpta ignored the chronological dimension of history and fostered the biographical turn in Byzantine historiography. By exploring theoretical questions such as classification and retrieval of historical information and the relationship between knowledge and political power, this book provides powerful new ways for exploring the Excerpta in Byzantine studies and beyond."