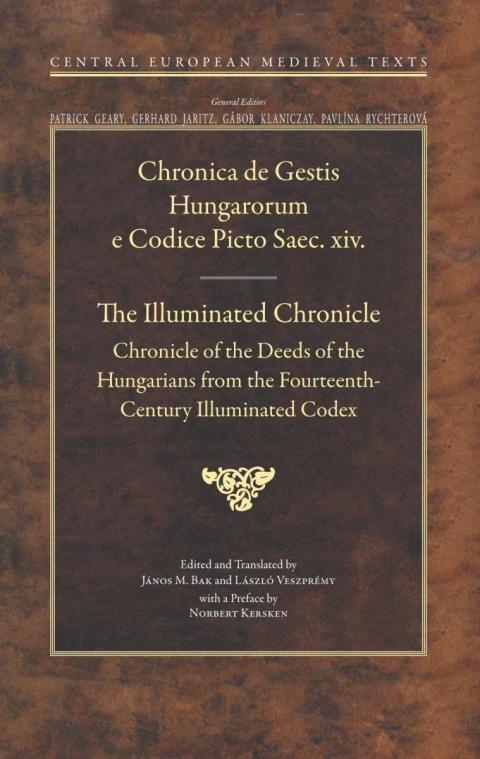 The ninth volume in the Central European Medieval Texts, Chronica de Gestis Hungarorum e Codice Picto Saec. xiv., The Illuminated Chronicle accompanied by the Studies on the Illuminated Chronicle was edited by János M. Bak, Professor Emeritus of the Department of Medieval Studies, CEU, and László Veszprémy, University Professor at Pazmany Péter Catholic University and Visiting Professor at the Department of Medieval Studies, CEU. The Studies is a a joint publication with the National Széchényi Library, Budapest.

"The Illuminated Chronicle was composed in 1358 in the international artistic style at the royal court of Louis I of Hungary. Its text, presented here in a new edition and translation, is the most complete record of Hungary's medieval historical tradition, going back to the eleventh century and including the mythical past of its people. The pictures in this manuscript—formerly known as the Vienna Chronicle—are not merely occasional illustrations added to some exemplars, but text and image are closely connected and mutually related to each other, to qualify it as a proper “illuminated chronicle”. The artistic value of the miniatures is quite high, and the characters are drawn with detail and with a knowledge of anatomy. Forty-two of the miniatures are included in the present volume. A full color facsimile will be accessible online..."

See more on The Illuminated Chronicle

See more on the Studies on the Illuminated Chronicle