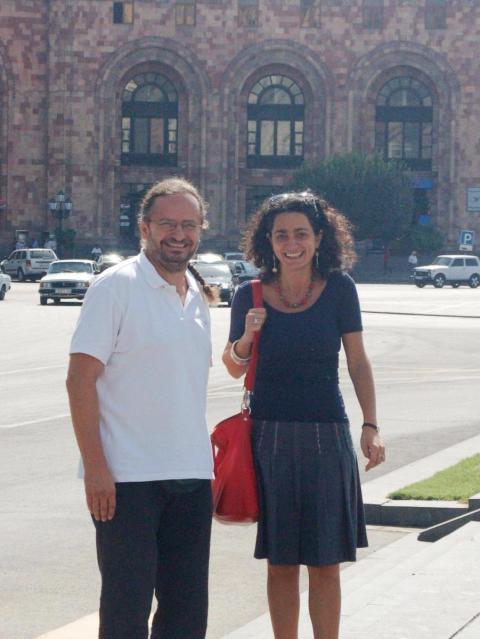 In December 2019 Zara Pogossian was awarded a prestigious 2019 European Research Center (ERC) Consolidator Grant. Her project seeks to establish a new framework for studying the Caucasus, Anatolia and northern Mesopotamia (CAM) between the 9th to 14th centuries. Entitled ArmEn - Armenia Entangled: Reimagining Cultural Encounters and Connectivity in Medieval Eurasia 9th - 14th Century, the project grant is 2 million euros, the maximum amount awarded by the ERC for such competitions.

Since September 2015, Zara has been working as a Research Fellow at the Center for Religious Studies, Ruhr Universität Bochum (Germany). She is also part of the research team in the Caucasus Subproject in the ERC Project JewsEast.

After her graduation at CEU (PhD in 2011) Zara Pogossian taught at the American University of Rome and the John Cabot University, Rome. Her dissertation was published as The Letter of Love and Concord: A Revised Diplomatic Edition with Historical and Textual Comments and English Translation (Brill: 2011). She has been the recipient of research fellowships such as a post-doctoral fellowship from the Alexander von Humboldt Foundation (2010-2011, Eberhard Karls Universät Tübingen, Germany), as well as a fellowship at the Käte Humburger Kolleg for Dynamics in the History of Religions (Ruhr Universität Bochum, Germany). She was a fellow at the International Consortium for Research on Fate, Freedom, and Prognostication. Strategies for Coping with the Future in East Asia and Europe at the Friedrich-Alexander-Universität, Erlangen-Nuremberg. In 2016 Dr Pogossian was invited to the University of California, Los Angeles as Distinguished Visiting Scholar at the Center for Medieval and Renaissance Studies.

Her years at CEU were fundamental for many respects. They formed her as a scholar and she is grateful to all of her professors, particularly her supervisor István Perczel. She also met her beloved husband Vasco La Salvia at CEU, as a class-mate during her MA year.