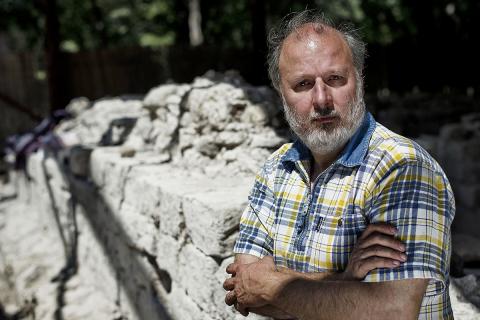 CEU Professor of medieval studies Jozsef Laszlovszky and his students have been hanging out in the 12th century. They haven't gone back in time, just up the Danube to the site of a medieval monastic estate in Pomaz that housed a glass-production center. Part of the site was poorly excavated in the 1930s and skeptics weren't sure that it was once a bustling manufacturing hub but Laszlovszky, who is also an archeologist, and his team have been studying the very real evidence. From bricks that bear the scars of very high kiln temperatures to broken pieces of glass, it's now clear that the site, which includes a church and a cemetery, was a specialized center.

“We got into archeological layers full of typical materials – for example, fragments of melting pots with melted glass and even complete glass object which were most likely the finished products,” said Laszlovsky. “Interestingly, they probably used recycled glass for the products. We think that's a 21st century thing, but it's not.”

For decades the excavation site – about 20 kilometers from Budapest – was owned by a state company and was off limits to the general public. Laszlovszky was brought in by the local council to do an archeological survey to asses the site. Now owned by a private investor with a keen interest in preservation, the site will eventually be open to the public.

“All of these regional monastic sites were abandoned during the Ottoman period,” Laszlovszky said. “Many are totally lost and some just small ruins. It's hard to identify which order each ruin was associated with in medieval documents. I concluded that this must be a special industrial site of a major Cistercian abbey at Pilis (today Pilisszentkereszt). They were very keen on industrial production and use of water energy. As we gathered more data, we discovered there is a water system around it. This is basically new in the research of monastic orders. This is a site which has no parallels in the region.”

The Cistercians were an order of monks who sought a life that more closely mirrored that of the Rule of Saint Benedict, a sort of guidebook for monastic life. They chose to break off from the main tradition of Benedictine monks in order to adhere to an austere life tied to the land and anchored in self-reliance. The careful study of this site could lead Laszlovszky and his research students to better understand the monks' system of technology transfer which is largely absent in written documents. It is thought that technological innovations like iron and glass production and water management systems were initiated at the regional monasteries and then implemented in nearby towns and villages.

In May, Laszlovszky and his students hosted a team of archeologists and students from the University of Reading (UK) as part of an Erasmus exchange program. “This kind of firsthand information and knowledge is very important for students,” Laszlovszky said. “If they only see this in books, it's not the same; they can't determine exact quality of findings. This part of monastic life is little known to us but archeology is providing the answers for us.”