The Hungarian government has proposed amendments to the National Higher Education Law that would make it impossible for Central European University – and possibly other international institutions – to continue operations within the country. These changes would endanger the academic freedom vital for CEU’s continued operation in Budapest and would strike a blow against the academic freedom that enables all universities to flourish. It is time for friends, supporters, and educational and academic communities to defend our institution and the independence of higher education institutions around the globe.

In addition to the huge number of declarations of support received by CEU, many of our Department's friends, partner institutions and alumni expressed their support.

We, faculty members and researchers of the University of Cambridge with Hungarian roots watch the Hungarian government's offensive against the Central European University (CEU) in Budapest with sorrow and consternation. Many eminent colleagues both in Hungary and around the world have pointed out recently that CEU is one of the very few world class institutions of learning and research in the country. As such, it deserves to be supported, not attacked. In fact it would even suffice to simply allow its academics to do their job.

What happens when we do not defend academic freedom

Berthold Rittberger (University of Munich) and Jeremy Richardson (Nuffield College, University of Oxford; University of Canterbury, NZ)  published a short but really insightful paper in the Journal of European Public Policy, in support of CEU.

Read the full article in the attachment. It's worth reading... 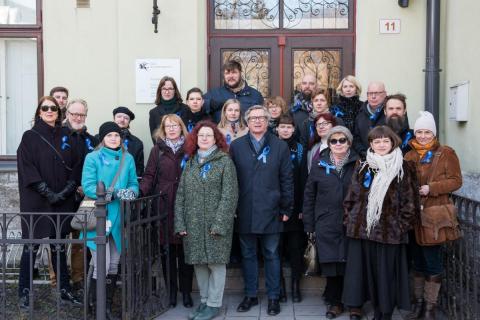 Estonian graduates of CEU and their friends and colleagues expressed their support to the university, by meeting in front of the Estonian Academy of Arts, wearing blue ribbons.

Colleagues from the Masaryk University

we are writing to express our deep concern regarding Bill T/14686 amending the Hungarian Higher Education Act, accepted by the Hungarian Parliament on April 4, 2017, which severely threatens the further operation of Central European University (CEU) in Budapest.