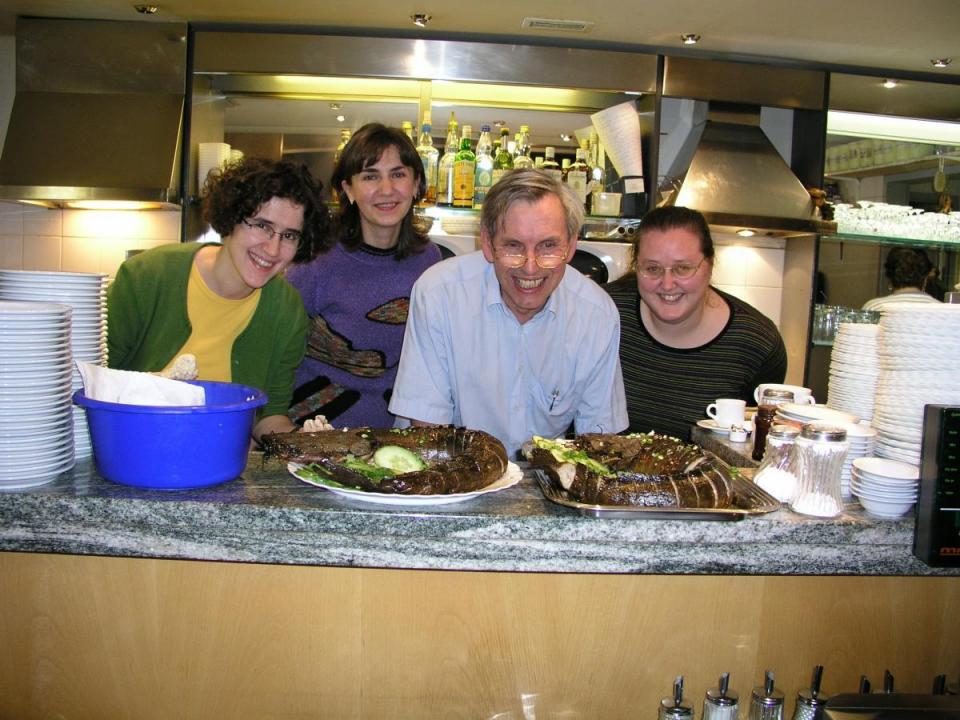 Toward the end of Fall Term, cooked and served by Gerhard Jaritz and the Daily Life class:

Those who have not got any appetite to eat, they should make a sauce of garlic. They should take three leaves of sage and a bit of bread and salt, and grind that and mix it with vinegar, and put the garlic into it. Take two cloves of ginger and 30 peppercorns, pulverize them and add them. And put vinegar on it and mix it. This sauce you should take for three or four days, then you get appetite again.

After eating Gerhard Jaritz’ pungent and puckery bread mixture at every medieval dinner, Judith Rasson saw this modern version on the BBC, made by a north Italian chef.

Put the bread cubes into a bowl, dampen with water. Add the tomatoes, cucumber, onion, and garlic. Sprinkle generously with oil and vinegar (the bread will soak up some liquid), add basil, salt, and pepper to taste. Mix well.

A Dish of Pike

Carefully remove the fish’s skin as a whole and reserve it. Boil the fish meat until done and remove the bones. Mash the de-boned fish with the eggs and bread. Add spices to taste. Stuff the fish-egg-bread mixture back into the fish skin, place on a baking tray and bake until done. Cool.

Present the whole fish on a platter, sliced cross-wise. Garnish with parsley and sliced cucumber.

Grind the almonds finely. Mix in about 1/3 as much honey as the quantity of almonds. Add spices to taste as desired. The mixture should be quite stiff. Form into balls about the size of walnuts. Serve as a dessert.