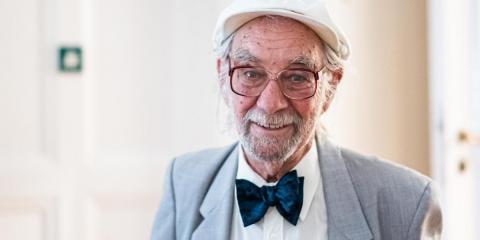 János M. Bak, founding member and Professor Emeritus of CEU Department of Medieval Studies has passed away on 18 June, at the age of 91. Until the last moment of his life, he was an engaged scholar, an authoritative and caring professor, an indefatigable worker for an international cooperation for the advancement of learning and the broadening of the ‘Republic of Letters’. When mourning and remembering him, let us recall a few things of his rich, adventurous, life – the Festschrift he received from us when he was 70, was entitled The Man of Many Devices, Who Wandered Full Many Ways...

The adventures started towards the end of World War II, when he had to survive as a teenager the Holocaust, with tricks and hiding in Arrow-Cross dominated Budapest. Subsequently, after a brief period of enthusiastic conversion to Marxism, he quickly got disillusioned from the unfolding Stalinist regime, and he became an active participant in the 1956 revolution. At its defeat he left Hungary and earned a medieval studies doctorate in Göttingen, as a pupil of Percy Ernst Schramm. As a postgraduate, he spent two years in Oxford, then worked at the University of Marburg, and published a much-cited monograph on ‘Kingdom and estates in late medieval Hungary’. In 1966 he moved to the US and subsequently to Canada, he became professor at the University of British Columbia in Vancouver. As a member of the world-wide community of 1956 émigré intellectuals, he was very active in supporting Hungarian colleagues with books, invitations, scholarships, publication opportunities. At the same time, he became a major organizer in international medieval studies. After some years of investment into the history of ‘East-Central Europe’, and ‘peasant studies’, in the 1980s he organized Majestas, a scholarly association for the study of rulership, which functioned for two decades, organized several successful conferences and published a review with the same name.

When he retired as Professor Emeritus from Vancouver in 1993, it was not for having a rest, but for joining a new, ever-more demanding academic adventure: building a Department of Medieval Studies at the recently founded CEU in Budapest. He brought home his world-wide network and made the largest contribution in turning our department a thriving new center in this field. And this was not only thanks to his high-class German and American experience, but above all because of his passionate engagement with the wonderful, enthusiastic international group of our graduate students. Like probably all other departments in CEU, our seminars became fascinating scholarly workshops combining hidden treasures of local knowledge with high standards of cutting-edge international scholarship. And, in all this, János was a lively, critical, once funny and cheerful, other times nervous and grumpy participant, sometimes scaring students to death with angry explosions, but then giving them due respect, fatherly protection and friendly encouragement – multiple generations of students are weeping now over this departure.

The efficient and warmly human impact on the formation of future scholars was paired by his tireless organizational drive. In the first, founding years of our department he was like a high-speed engine, coming every week with a new suggestion, what should be the next step of further constructing, developing our program. It was his suggestion to publish yearly an Annual (which is now in its 25th year); he also initiated the publication of a review dealing with East-Central Europe; once we had the New York State MA accreditation, he urged us to move on immediately for the PhD (ours was the first accredited PhD program at CEU).  While still caring about Majestas, at CEU he initiated a large research project on the comparative history of medieval nobility in Central Europe. He kept investing much energy and recruiting junior collaborators to source-repertory handbooks. We organized together, involving our best students, a research, several exhibitions and an international conference on the contemporary ‘uses and abuses’ of the Middle Ages. He started a bilingual source edition series entitled Central European Medieval Texts (which has published 9 volumes at CEU Press – two more are in the pipeline); he published in 5 volumes the ‘Laws of Medieval Hungary’ in annotated English translation. He retired from CEU as Professor Emeritus in 2007 – for this occasion he received at the Medieval Academy of America the prestigious CARA Award for Excellence in Teaching Medieval Studies. For his 80th birthday a selection of his studies was put together in the prestigious Variorum reprints series, with the title Studying Medieval Rulers and Their Subjects. Central Europe and Beyond.

He remained very active as emeritus: surrounded by faithful students coming to visit him from Croatia, Poland, Russia, Ukraine, and, of course, Hungary, he advised them in their work, he involved them in his new editorial and lexicon projects. He played a key role in the foundation of MECERN, Medieval Central European Network, in 2014. One of his last projects was a new OUP Handbook on Medieval Central Europe. He corrected the proofs of his ‘Medievalism’ - chapter a few days before his death. He had several injuries during the past years, he walked with a stick, but he frequently took the effort, until the beginning of this year, to come to CEU for listening to the MA or PhD defenses, to hear the public lectures of his younger colleagues or his visiting friends from the world-wide company of medievalists. A year ago, at his 90th birthday, in recognition of his contribution to medieval studies, a research fellowship was founded, named after him. More than 80 individuals worldwide donated over $35,000 to the ‘Janos M. Bak Research Fellowship on Medieval Central Europe’. The last time he came to CEU (already very ill) was in March 2020, to the public lecture of the first scholar who won this fellowship for spending three months in Budapest, at our department.

We were exceptionally fortunate to have him as a friend and a colleague for three decades, his departure is a great loss for us, for CEU and for medievalist scholarship around the world.

To conclude this obituary let me quote the words of our rector, Michael Ignatieff: “I knew Janos for 40 years, as a scholar, friend, bon vivant, intellectual provocateur. He embodied the spirit of CEU at its best: morally serious, intellectually irreverent, and fiercely loyal to ideals. We will all miss him.”

And another word by Patrick Geary: “May his memory be a blessing for us all.”