European Humanism and Its Challenges - Conference in Ljubljana 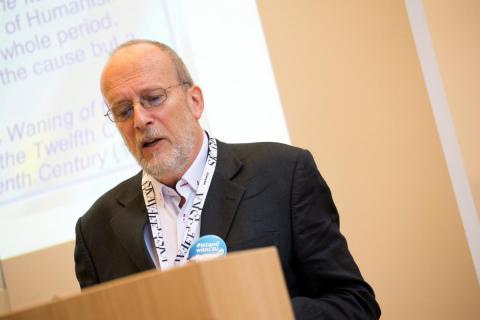 The Department of Medieval Studies at CEU had a strong presence at the International Symposium on European Humanism and Its Challenges, which took place in Ljubljana on September 8 and 9, 2017. The Symposium was organised by the Department of Classical Philology, Faculty of Arts, University of Ljubljana; Department of Medieval Studies, Central European University, Budapest; Faculty of “Artes Liberales,” University of Warsaw; Slovenian Comparative Literature Association; and Vilenica International literary festival. The symposium was under the honorary patronage of His Excellency Mr Borut Pahor, the President of the Republic of Slovenia.

The purpose of the symposium was to bring together scholars from different fields of humanities, arts and literature, and to investigate the present social and spiritual condition, when it sometimes seems that the role of humanistic tradition is diminishing. The papers shed light on these challenges, discussing the role of the arts and their relevance for the world and the human person, as well as their role in the future of an open and solidarity-based democratic society.

The Symposium was opened by prof. György Endre Szőnyi’s keynote lecture Broadening Horizons on Humanism, in which he reflected on the long debate concerning the definition of the humanism and the humanists, adding a few case studies in which we can observe the combination of philology, historical interest, and the proposition of new ideas. Other CEU alumni speakers were Petra Mutlová from Masaryk University with a paper on Jan Hus as an Inspiration in the 21st Century, Áron Orbán from CEU presenting Variations for Micro-Macrocosmical Relations in Conrad Celtis’s Amores, Gábor Almási from ELTE speaking about Education and Discipline: Work Ethic in the 16th Century, Sibil Gruntar Vilfan with a paper Nani Super Humeros Gigantum: Reusing Classical and Medieval Quotations in the Hagiographic Discourse in the Area of Liège (10th Century), and David Movrin, who was also one of the key organisers of the symposium, with a presentation on Chommoda and Hinsidias: Catullan Shaming of the Parvenu between Antiquity.

The Symposium was concluded with an excursion to Vilenica cave, where the presentation of the Vilenica International Literary Prize, awarded by the Slovene Writers’ Association, took place accompanied by literary readings. 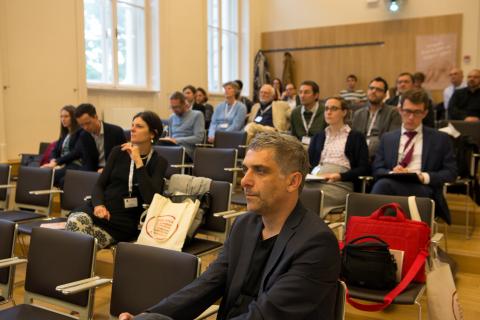 Among the many historical personalities that connect the eight countries gathered in this symposium, my personal favourite is a political rather than a scholarly figure; king Matthias Corvinus, the mythical “kralj Matjaž” from the folk tales that marked my childhood, a true hipster ante litteram, sporting a beard that apparently coils around his sleeping table under the mountain. The real Corvinus actually avoided excessive facial hair; he was a wise ruler whose long reign came to be considered the golden age of his lands. He promoted humanist scholars to important positions and was an unapologetic bibliophile who eventually amassed a library of some 2500 manuscripts. Writers who left testimonies of his rule testify to the remarkable explosion of arts, architecture, and humanism of the renaissance which took place when he married an Italian princess, Beatrice of Aragon, and opened his doors to a flood of her Italian courtiers, artists, and scholars. I was tempted to entertain you with the anecdotes preserved by Galeotto Marzio in his book with a catchy Latin title De egregie, sapienter, iocose dictis ac factis regis Mathiae – but after paging through some that were deeply inappropriate, I think I will spare you that experience. Perhaps we do not need the anecdotes, since by now you all see the point I am trying to make: for scholarship to flourish, one of the essential prerequisites is support.

That is why the organisers are indebted to the many institutions who helped with putting together the rich mosaic that will mark the following two days. First of all to Borut Pahor, the President of the Republic of Slovenia, who kindly accepted honorary patronage of this occasion. Our Department of Classical Philology offered its full backing and without our inventive students, this gathering would not have been possible. Slovenian Comparative Literature Association provided its logistical backbone, organised its finances and showed a remarkable amount of trust. Vilenica International literary festival, organised by the Slovenian Writers’ Association, provided our initial venue, a picturesque and uniquely atmospheric villa across the street, whose charms will sometimes remind you of the Massolit, the literary organization in Bulgakov’s Master and Margarite. When the number of applicants exceeded our expectations and it became clear that one villa will not suffice, National Gallery helped us out with this brand new auditorium and agreed to let our guests visit their collections as they wish, with only their namecard in lieu of a ticket. And Insula memoriae, the vocal ensemble for plainchant and renaissance music, impressed this event with beauty, as Saint Augustine would say, so ancient and so new.

Two of these institutions, however, were unique. Faculty of “Artes Liberales,” University of Warsaw, has been a constant inspiration during this last decade; the quality of their research as well as their academic integrity and inventiveness are a bit of a city on a hill, to use the age-old metaphor; and dr. Elzbieta Olechowska, who is now with us and will address you in a minute, has been its ticking heart, providing constant impetus around which this symposium eventually materialised.

And then there is Department of Medieval Studies at the Central European University from Budapest, alma mater of several scholars of the younger generation that are here today. I do not need to repeat what we all read in thenews – and to say that this has been a difficult year would be an understatement. It seems that we are living in what Chinese would term interesting times, and I am not sure that the utterances and activities that are currently coming from the corridors of power will merit a title such as De egregie, sapienter, iocose dictis ac factis any time soon. What truly surprised me was the level of support for the Budapest academics that I witnessed among my Slovenian colleagues, support that went across the political spectrum; people from the left and from the right, people I have not seen together in years, suddenly spoke with one voice to defend basic freedom of teaching and research. Our support may not be much, but it is what we have. And the fact that in these conditions teachers and alumni of the Central European University provided some of the strongest contributions that we are about to hear during these two days, speaks volumes about the persistency of serious scholarship.