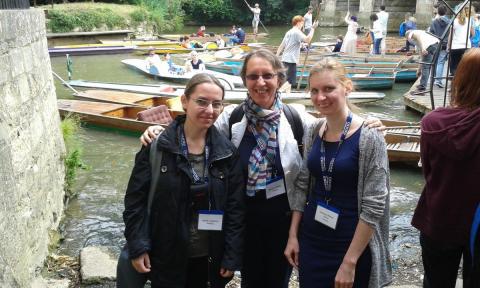 BREAKFAST WITH MY BIBLIOGRAPHY
or
OUR FIRST OXFORD!

It was my very first international conference and my first visit to the United Kingdom, so naturally I had been both excited to go and worried as I prepared to present my paper, “Images of the Resurrected Body in Augustine” at the most prestigious scholarly venue in patristic studies.  The worries disappeared as I arrived, but the excitement stayed throughout the entire length of the conference, and grew even bigger as I was constantly challenged with new ideas and novel approaches during my stay, not only at lectures, workshops and short communications, but even at breakfast! I will never forget that, in the stunning medieval dining hall of Merton College, I sat opposite Allan Fitzgerald, who not only served me coffee very politely, but also talked to me very kindly! As I looked around, I realized that I was having breakfast with the most often quoted authors in my bibliography! The best moment of the Oxford Patristics was for me when I realized that the names in my bibliography are not only actual, living persons, but also very kind human beings, happy to share their ideas and help young researchers. This was probably the single most important insight that I gained at this great conference.

Yes, I did rewrite my paper every night in the Turl Street dorm of Lincoln College.. Yes, I did recite it again and again, following the advice of my supervisor Marianne Sághy, who patiently listened to my performance the evening before the big day. By the time I had to deliver my paper on Friday morning, the last day of the week-long conference, I felt there was nothing to be afraid of, as I was to speak to colleagues and fellow researchers whose feedback I appreciated most. Gillian Clark was my chair and when Carol Harrison rose and came to me congratulating on my paper, I felt I was in heaven. I loved every minute of the conference and I am determined to participate at the next one in 2019!

My very special thanks go to the Association Internationale des Études Patristiques (AIEP) for the considerable financial support they accorded to me. Without this, I would not have been able to participate. I am grateful to the President of AIEP, Professor Theo de Bruyn, for his interest in my project and for his encouraging words. It was a true eye-opener that the Hungarian Patristic Society, of which I am a member, was founded in an Oxford pub, The Lamb and the Flag. I religiously visited another pub across the street, The Eagle and the Child, of Tolkien and C.S. Lewis fame. I am very grateful to the always kind and helpful organisers, who successfully pretended that arranging a conference of such magnitude with hundreds of speakers and several parallel sections in different locations was easy. I also would like to thank my professors at CEU, István Perczel for the great conversation on the flight back to Budapest, and my supervisor Marianne Sághy, who helped me obtaining the AIEP grant, introduced me to the Oxford experience, explained that the Thames was called Isis here, showed me around in Magdalen College and New College Chapel, and shared her Oxford memories from 1986-87 with me.

This was definitely my most exciting academic experience. It was also my first major conference, where I found myself surrounded by more than a thousand speakers! It was wonderful to run into professors in the Examination Schools who are regular guests at CEU, like Claudia Rapp and David Hunter. I was thrilled to see in action scholars whose works I eagerly read: Samuel Rubenson, James Goehring, Brouria Bitton-Ashkelony. I was delighted to explore Oxford with Judith Herrin, on the way to Ertegun House, where The Oxford Handbook of Maximus the Confessor was launched, and to meet again Carol Downer, my Coptic teacher in London.

Every day was filled with short communications, keynote lectures, workshops, exhibitions. This avalanche of moments was a big challenge for me, since, many times, I was eager to go to two or three simultaneously. Me and my friends divided, so we literally ran between conference rooms or even between buildings. Another challenge was the length of the lectures; since a bell strictly limited them to 12 minutes, we had to concentrate our ideas to fit the time. The discussions following them only began in the conference room; after 5 minutes (usually when the debates became ardent), the moderators rang the bell again, announcing the following speaker. Naturally, before I presented my paper on “The Function of Miracles in the Hagiographical Writings of Gregory of Nyssa,” my worries increased, all the more since the chair of my session was Isabella Image. I enjoyed most the afternoon workshops, held in different locations, especially “Early Monastic Paideia” (convened by Samuel Rubenson), “Byzantine Prayer Books in Focus” (convened by Claudia Rapp), and “Recent Research on Dionysius” (convened by István Perczel). Besides being inspiring and innovative, for me these were the best proofs that teamwork yields wonderful achievements. I am now stimulated to attend the following edition, in 2019.

I would like to thank my supervisors, Marianne Sághy and István Perczel, for their encouragements and help in preparing my presentation. All the way to it was illuminating. I am grateful to Roberta Franchi for fruitful discussions and her contagious enthusiasm for Macrina and women’s spirituality in the early Church. With my friends, Ana-Maria Raducan, Johanna Rákos-Zichy, Gáspár Parlagi as well as with the members of the Hungarian Patristic Society, I spent wonderful moments at the Oxford Patristics.