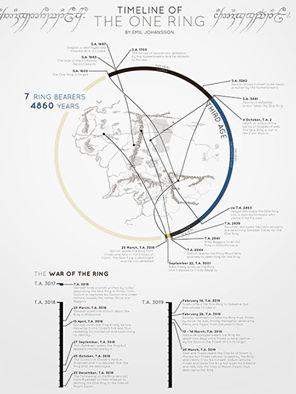 Can an imaginary world be considered as ‪#‎CulturalHeritage‬? Is it a proper subject of analysis for the ‪#‎DigitalHumanities‬? What do you think about prosopography databases and GIS showing hobbits’ and orcs’ settlement pattern? Or about population pyramid and life expectancy of dwarfs and goblins? Are you interested in the timeline of the main historical events in the fictional universe covering more than two thousand years? The project called LOTR (Lord of Rings Project) http://lotrproject.com/ suggests an extensive genealogy of “The Hobbit” and “The Lord of the Rings” by John Tolkien, as well as an interactive historical timeline of Middle-Earth and demographic and social statistics of its population.
The project was launched in 2012 by Emil Johansson, a Chemical Engineering student from Gothenburg. Started with the genealogy tree of Tolkien’s characters, the project was supplemented later with an interactive map, a timeline, and text mining tools for analyzing Tolkien’s text. In the menu of the interactive map of Middle-Earth, one can present data about the settlements, the topography, and the paths of the most famous characters. For example, it is possible to track in details the path of Frodo and Sam from Rivendell to Mordor, which is one of the main plots of “The Lord of the Rings”. The “Timeline” page suggests a list of the most important events in Middle-Earth. Clicking on an event, you can see its location on the map. The section “Analysis of Books” offers a solid toolkit for text mining: keyword frequency, how and where a character is mentioned in the different parts of the corpora, sentiment analysis, word count and tags clouds, chapter lengths, etc.

On the “Statistics” page one can learn, that the ratio of male and female inhabitants of Middle-Earth was five to one; that the dwarfs’ average life expectancy was 200 years; that the oldest hobbit was Sméagol, who lived more than 598 years, and the youngest was Lotho Sackville-Baggins, who turned 55 years old at the time of writing the book. As an another example of interesting statistical facts, Bilbo in “The Hobbit” crossed 1,800 miles over 185 days, and Frodo in “The Lord of the Rings” 950 miles in 172 days. Thus, Bilbo was nearly twice as fast as Frodo: they took 16 and 9 kilometers per hour respectively.
Overall, fascinating infographics, interactive tools for text analysis, interesting statistical facts, as well as quizzes and tests to check how deep is your knowledge of Middle-Earth’s history make surfing LOTRProject no less exciting than reading Tolkien.