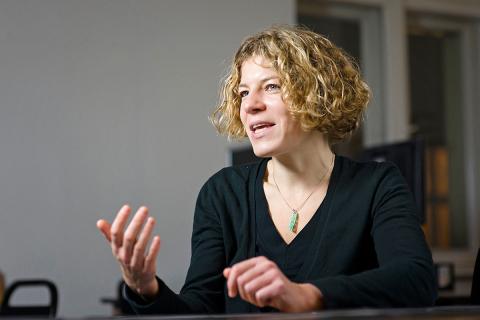 Yezidis claim to be descended from Adam (but not Eve) by way of their sacred angel – the Peacock Angel – who placed Adam's seed in a jar resulting in the birth of Shehid bin Jer, their forefather. This creation myth separates them from other religions that claim lineage from both Adam and Eve. It is a quite insular community, since Yezidism dictates that it is forbidden to marry or procreate outside of what they consider the one true religion.

Spat, who graduated from CEU in 2009 with a PhD in medieval studies, is currently a research fellow in the CEU Department of Medieval Studies with an OTKA (Hungarian Scientific Research Fund) grant. In 2011 and 2012 she carried out field research in Iraqi Kurdistan with the help of research grants from OTKA and Gerda Henkel Foundation.

Iraq is a predominantly Muslim country, and that has proved challenging to the Yezidis, many of whose beliefs pre-date Islam. In 1991, during the Kurdish uprising against Saddam Hussein, many Yezidis fled northern Iraq (along with nearly 2 million Muslim Kurds) but the establishment of a no-fly zone there allowed their return to what is now referred to as the Kurdish Region, an independently governed part of Iraq. Still, many Yezidis were permanently displaced and have settled in Western European countries, especially Germany. Scholars of Yezidism have tended to work with these displaced Yezidis, until Spat lived among them in their native northern Iraq for nearly a year in total.

Spat's initial field research happened to occur during a very contentious time: the Iraq War in the early 2000s. “I was studying Yezidi texts but it still felt removed; I didn't really know the religion,” she said. “I wanted to go to the Safe Haven [no-fly zone] but there were some problems, like getting a job, and even entering the country.” Spat eventually secured a job teaching English, but reporting to that job meant first trying the Turkish/Kurdish border, where she was turned away, then applying for special permission to enter via Syria. After an inauspicious beginning, the research itself was difficult to conduct because most Yezidi, though willing to help, felt that talking about religion and religious practices is the privilege of acknowledged religious leaders.

“The people aren't quite sure what you are really interested in, so you need friends in the community, and you have to learn how to ask questions, and that takes time,” Spat said. “It was during my last two trips in 2011 and 2012 when I started forming really close relationships with people. I learned how people live the religion by living among them.”

Yezidi religion was wholly passed down through oral tradition until the 1970s. Religious memories and hymns are preserved by “qewwals,” who sing the sacred songs and play instruments during religious ceremonies. A pilgrimage to the holy Lalish Valley is the most important ritual, and an annual festival in autumn brings thousands of Yezidi there. The scripturalization of the religion has gone hand in hand with reformulating Yezidi mythology, including representing it as the original Kurdish religion, which ensures Yezidis a prestigious role in modern Kurdish nationalism and nation-making. Currently many Yezidi settlements are outside the Kurdish Region but Kurdish politicians, as well as many Yezidis, strive to include them in the Kurdish Region.

Spat has watched – for nearly a decade – the progress and setbacks of the Yezidi. In the past, many Yezidi never sent their children to school, because the schools were associated with Islam. However, in recent years, Spat has noted that many Yezidi children are now attending school, outnumbering Muslim students in some districts, and even pursuing higher education. Interestingly, in some Yezidi high schools, girls (who were hardly educated a decade ago) now outnumber boys.

She also served as a war correspondent for a Hungarian newspaper until she had to flee along with thousands of Kurds and Yezidi during the 2003 U.S. invasion of Iraq. Her ongoing research subject is Kurdish nationalism and the Yezidis in modern Iraq, Yezidi oral history, and the scripturalization of Yezidi religious oral tradition, but she is also interested in religious healing and the phenomenon of Yezidi seers. Spat has published two books about this enigmatic people: “Yezidis” and “Late Antique Motifs in Yezidi Oral Tradition,” and numerous articles on Yezidis and Late Antique dualist movements.