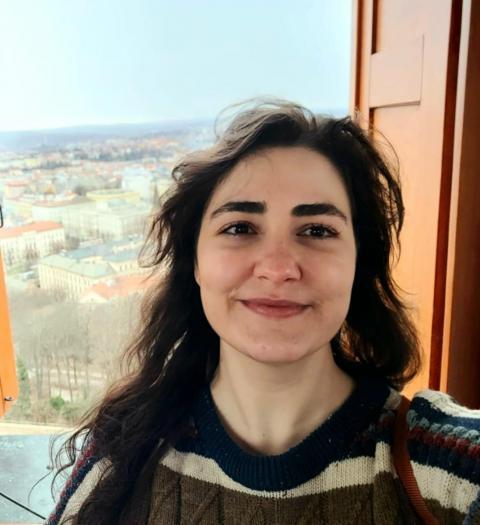 The Department of Medieval Studies would like to extend its warmest congratulations to Zeynep Olgun, who received the Best Thesis Award of the Center for Eastern Mediterranean Studies in AY 2021/2022 for her thesis titled, "A Sailor's Life for Me: The Middle Byzantine Sailor on Board and at Port" and supervised by Prof. Baukje van den Berg. Zeynep has just finished the two-year MA program in Comparative History: Late Antique, Medieval, and Renaissance Studies and she will soon start her doctoral studies at the University of Cambridge.

Abstract of the thesis:

This thesis focuses on Byzantine sailors in the Middle Byzantine Period (c. 642 CE–1204 CE) in the Eastern Mediterranean by drawing a general picture of the sailors’ daily lives. In so doing, I argue that the experience of being a Byzantine sailor was multifaceted and complex. To gain insight into this variety of experiences, this thesis relies on the interdisciplinary study of textual, archaeological, and ethnographic sources from the Middle Byzantine Period and beyond, based on the longue durée characteristics of seafaring and interacting with maritime landscapes. These experiences are the result of the commonalities of living in the maritime landscape and interacting with this landscape through seafaring. Maritime travel covered various distances (day-long, regional, long-distance) through different types of sailing patterns (cabotage, tramping, and direct), form the framework for travelling in the seascape. To better understand the movement of the sailor, I introduce two concepts: emplacement (sailors belonged to their local maritime communities and cultures) and displacement (sailors journeyed away from this community). On this journey, the sailor stopped at two different types of ports: short-distance ports which served those who moved within micro-regions, and ports connected to long-distance trade which provided certain establishments, such as taverns, inns, and brothels, for the sailors and were central to a sailor’s experience at the port. Some sailors, such as the crew of the eleventh-century Serçe Limanı shipwreck, moved outside the boundaries of the Byzantine Empire, and had to mediate linguistic, political, religious, and economic differences. Moreover, the daily experience on board the ship during journeys was regulated through laws, customs, and practices which governed the sailors’ behaviours, bodies, and souls. By discussing the daily lives of Byzantine sailors, this thesis contributes to the wider scholarship regarding Byzantine society and experiences, and by employing a variety of sources in an interdisciplinary manner, gives voice to a group who otherwise would remain silent.