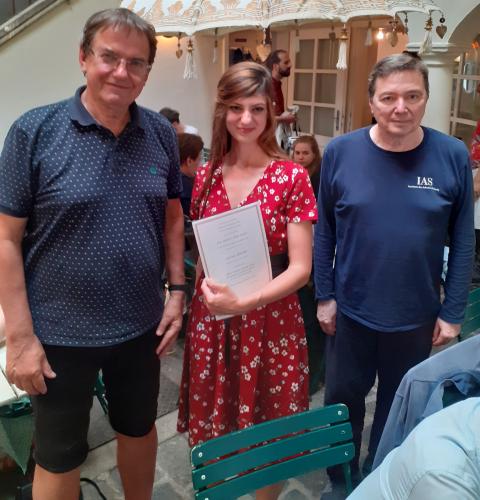 The Department of Medieval Studies would like to extend its warmest congratulations to Ana Inés Aldazabal, who received the Best Thesis Award of the Center for Religious Studies in AY 2021/2022 for her thesis titled, "When Woman Married Satan: The Emergence of Diabolical Witchcraft in French Medieval Literature." (On the photo, Gábor Klaniczay, Ana's supervisor, on the left and Jean-Louis Fabiani, the Director of the Center for Religious Studies, on the right.) Ana earned her first degree at the University of Buenos Aires and returned to academia after a few years' hiatus at CEU, where she has just finished the two-year MA program in Comparative History: Late Antique, Medieval, and Renaissance Studies.

Abstract of the thesis:

In the Middle Ages, official attitudes towards magical practices evolved from the skepticism admonished by tenth-century canon law to a widespread belief in the threat of demonic witches by the end of the fifteenth century. In literary works, representations of magic and magical practitioners do not always seem to adhere to official views. Analysis of the relationships between literary and non-literary written sources concerned with the issue of witchcraft can prove fruitful in understanding the change in attitude that took place in late medieval times.

This thesis focuses on the evolution of witch-like figures in French-language literary works. First, it traces the general trends in the evolution of the stereotype of the witch from the genesis of courtly romance in twelfth-century France to the first representations of diabolical witchcraft in fifteenth-century literature, at the time when some of the first mass witch trials were taking place in francophone lands. Then, it concentrates on an episode of the little-known Roman de Perceforest. The core of my research consists of a close-reading analysis of this fifteenth-century romance episode, which allows me to assess how some of the impressions obtained through the previous general examination of the stereotype’s development come into being in a specific case. Through the work carried out in this thesis, I hope to offer a contribution to the study of the shaping of diabolical witchcraft in vernacular literary sources of the last centuries of the Middle Ages.