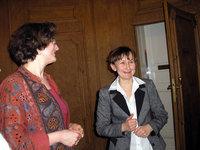 Iulia Caproş has received her first degree in Philology at the State University in Chișnău, Moldova and worked as a lecturer at the Department of Classical Philology of the same institution. She defended her Doctoral Thesis at CEU in 2010. From 2007 to 2011 Iulia has taught different courses related to Middle Ages and Early Modern Times at the Department of World History at the State Pedagogical University in Chişinău, Moldova, for which she received several AFP OSI teaching scholarships. From September 2011 she is working on her post-doctoral project on academic migration from Moldova abroad and has been a guest-researcher at the Institute for Migration and Intercultural Studies at the University of Osnabrück in Germany, financed by a Fritz-Thyssen Foundation scholarship. Her dissertation on students from Košice at foreign universities during the Reformation period in the town is to be published soon by the Solivagus-Verlag in Kiel, Germany.