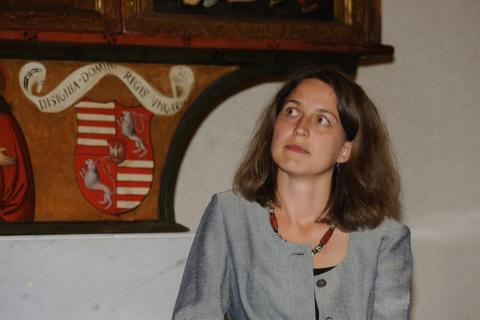 Emese Sarkadi Nagy studied history and art history at the Babes-Bolyai University in Cluj (Kolozsvár, Romania), then received an MA in Medieval Studies at CEU in 2000. She defended her PhD at CEU Medieval Studies in 2008. Her main field of interest is medieval art with special reference to altarpieces in Transylvania. Her PhD was published in 2012 titled Local Workshops – Foreign Connections. Late Medieval Altarpieces from Transylvania by the Thorbecke Verlag (Studia Jagellonica Lipsiensia Bd. 9., GWZO Leipzig). After scholarships in Leipzig, Gundelsheim and Berlin, she was engaged in the organization of the international exhibition Sigismundus. Rex et Imperator (Budapest - Luxembourg 2006) as member of the program office. Later she worked at the Library of the Museum of Fine Arts in Budapest, and offered courses dedicated to Transylvanian medieval art at ELTE Art History Department (2010), and the Pázmány Péter University’s Art History Department (2012). Currently, she works as researcher at the Christian Museum Esztergom, preparing a short catalogue of the Central European medieval panel paintings and wood sculptures. Parallely, she teaches at the Cultural Heritage and Cultural History Department of the Eszterházy Károly Főiskola in Eger.